Linda Leehman  has focused 20 years of political energy on videotaping, producing and airing a weekly cable access program called “Down By The Riverside”.

Gretchen Donehower is a demographer at UC Berkeley researching the role of age and gender in shaping how people produce, consume, share, and save resources.

Pardis Mahdavi has recently become director of the School of Social Transformation at Arizona State University after many years at the University of Denver.

Maddalena Marinari is an Associate Professor in History, Peace Studies, and Gender, Women, and Sexuality Studies at Gustavus Adolphus College.

Mónica Ortiz Uribe is a freelance multimedia reporter specializing in issues on the U.S./Mexico border.

2018 – America’s Place in the World: Power, Influence, and World Order

2008 – Religion and International Politics, Now and into the Future

2001 – The U.S. and the Challenges of International Leadership and Cooperation

1999 – Reaching Beyond States: The Role of International NGOs

1997 – Trouble in the Neighborhood: Co-Existence in North America

1996 – The Impact of Political Decisions on World Health

1986 – The Middle East: Societies and Schisms

1984 – Latin America: Dilemma on Our Doorstep

1983 – The Nuclear Dilemma: Security Without Annihilation

1982 – Leadership in a Troubled World

1981 – Confrontation – and the Alternatives 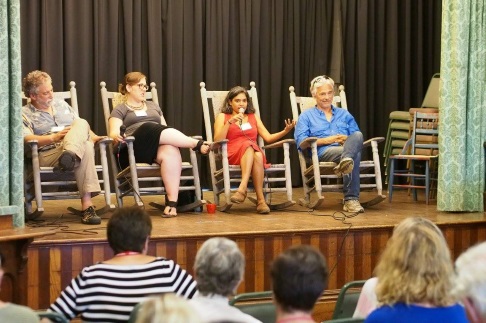